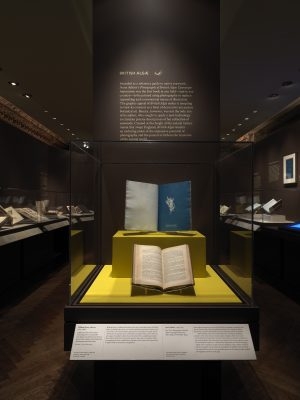 Anna Atkins: discovering one of photography’s hidden pioneers
For more than a century, the creator of these exquisite algae prints was unknown. Joshua Chuang charts her emergence

In the early 1970s, Larry Schaaf, a young photographer and professor at the University of Texas at Austin, was struck by a pair of 19th-century photographic prints he came across while exploring the Gernsheim Collection, an unrivalled group of photographs and related research materials the university had acquired the decade before.

They were deeply hued and compositionally bold, and Schaaf knew them to be cyanotype photograms: photographs made not by using a camera but by arranging objects — in this case, a sinuous specimen of seaweed and a handful of peacock feathers — on paper sensitised with iron salts, which when exposed to sunlight and developed render the objects as negative images against a background of Prussian blue.

While each of the two prints had its title handwritten at the base, neither was signed, leaving the identity of the photographer a mystery.

Although photography was well over a century old by then, documentation of its history and evolution, especially during its early decades, was still a work in progress.

Helmut Gernsheim, the London-based German photographic historian who with his wife Alison had amassed the encyclopedic collection, had singled out the image of feathers to illustrate their monumental 1955 survey The History of Photography. Its caption listed its maker as an “unknown photographer”, but by 1969, in the book’s second edition, Gernsheim credited the image to Sir John Herschel, the British astronomer, chemist and inventor who had discovered the cyanotype process in 1842.

Schaaf had doubts about the attribution. Although the photogram was printed on paper watermarked 1845, a date when few others were known to have made cyanotypes, it bore no resemblance to any of the photographic subjects he had found in an archive of Herschel’s papers also acquired by the university.

Could they instead be the work of Anna Atkins, an amateur botanist the Gernsheims had also cited as having made cyanotypes early on, publishing them privately in the form of a three-volume book titled Photographs of British Algæ: Cyanotype Impressions?

Fuelled by his initial research, Schaaf determined to examine first-hand as much of Atkins’ work as he could during a fellowship that brought him to England in the summer of 1978. What he found in the various copies he located in and around London (including those in the collections of the British Library, Royal Society and Natural History Museum) was a revelation: plate after handmade plate of impossibly delicate, starkly beautiful photograms of various kinds of algae, arranged with a scientific consistency and a bibliographic logic.

Schaaf returned to Austin convinced not only that Atkins was the creator of the cyanotypes he had seen in the Gernsheim Collection but also that her book, whose plates had never been reproduced, was more interesting and historically important than anyone seemed to realise.

He wove together his findings into an essay entitled “The First Photographically Printed and Illustrated Book”, which was published the next year in an American scholarly journal. Given that William Henry Fox Talbot’s famed “The Pencil of Nature” was long thought to have held that distinction, the essay’s title was conspicuous. But it stuck, as Schaaf was able to establish that Atkins had issued Part I of British Algæ in October 1843, a full eight months before Talbot released the first fascicle, or part work, of his book.

In fact, Talbot and Atkins had come to know and respect each other through Atkins’ father, the prominent scientist John George Children, and even exchanged copies of at least some portions of their respective books. But while their endeavours bear certain similarities, they embodied very different aims.

Talbot’s book was a carefully conceived prospectus for the applications of the new medium, while Atkins’ was a visual catalogue of seaweed specimens meant as an accompaniment to another book, William Harvey’s 1841 Manual of British Algæ. Unlike Talbot’s, Atkins’ book was not publicly promoted or commercially distributed. Instead it was given freely by its author to her “botanical friends” in semi-regular instalments over 10 years.

As awareness of Atkins’ significance slowly spread, copies of British Algæ and other cyanotype albums were discovered and appeared on the market, and in 1985 the New York Public Library acquired a partial copy of British Algæ to which Schaaf had attached a special significance. It was still in its original fascicle form, and was the copy that Atkins had inscribed and given to her friend Sir John Herschel.

That same year, Schaaf’s book, Sun Gardens: Victorian Photograms by Anna Atkins, the first fully illustrated monograph, was published. More than anything else, it established Atkins’ place in history, serving as an inspiration for artists and a wellspring for scholars. In 2004, in response to the growing number of requests from researchers wishing to consult Herschel’s copy of British Algæ, the NYPL became the first institutional holder to digitise its pages and make those images available online.

Since the publication of Sun Gardens, a handful of previously unknown copies of British Algæ have come to light, each with its own tantalising story. In 1992, a copy was found at the Jardin des Plantes in Paris, and more recently copies were discovered at the Horniman Museum in London and the Université de Montréal.

Two years ago, the Rijksmuseum acquired a copy, and not long after the NYPL was able to purchase the last known privately held copy of Volume III of British Algæ — a component of Atkins’ original project that Herschel probably never received. This last acquisition became the catalyst for the library to work with Schaaf on a new exhibition of Atkins’ work and to republish Sun Gardens in an expanded and revised edition, just in time to mark the 175th anniversary of the debut of Atkins’ landmark project.

Anna Atkins did not seek recognition for British Algæ — her full name does not appear anywhere in its pages. She died in 1871, and no account of her methods of production or record of her distribution lists has survived. But thanks to the enterprising scholarship of Larry Schaaf, she is a hidden figure no more.

“Blue Prints: The Pioneering Photographs of Anna Atkins” is at the Stephen A Schwarzman Building, 476 Fifth Avenue, New York 10018, until February 17; nypl.org. “Sun Gardens: Cyanotypes by Anna Atkins” by Larry J Schaaf is published by the New York Public Library and distributed by Prestel, £45/$65